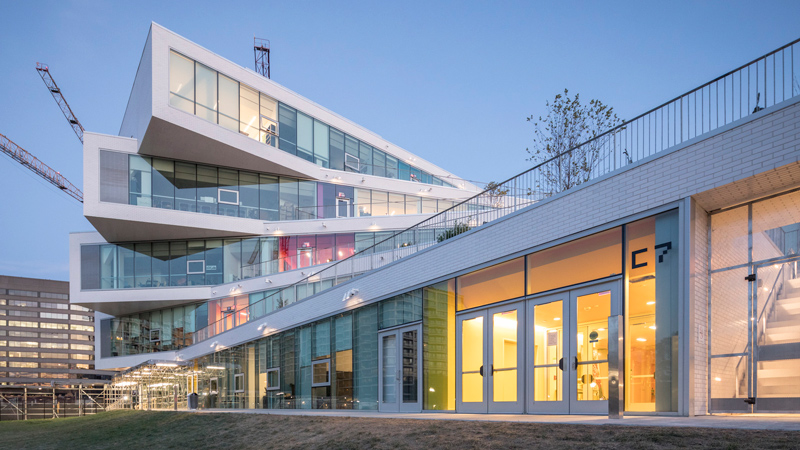 Over the past century, building enclosures have gone from being simple, massive assemblies to thin, light ones that are more complex and less forgiving. This shift, along with the ubiquity of air conditioning and the revolution in sustainable design, has quietly transformed the job of architect. To paraphrase economist Milton Friedman, we’re all building scientists now.

High-performance buildings require architects to embrace a new set of skills and tools in order to control the movement of air, moisture and heat through building enclosures under changing atmospheric conditions. This is especially critical as highly insulated, airtight building envelopes are being used to reduce energy consumption.

Today’s building assemblies are vulnerable to a range of issues that are lesser concerns in traditional enclosures. HVAC systems pressurize the interiors of buildings, pushing hot, moist air into exterior assemblies. Highly insulated wall systems require fewer air changes just as pollutants are reaching higher concentrations. Meanwhile, these assemblies don’t easily dry when wet, which can result in moisture being trapped inside walls. This makes it easier for mold, mildew and condensation to build up and for wall systems to fail before their time. Things get even trickier for designers when high performance design comes into conflict with prescriptive building codes.

All of these challenges were in play when LEO A DALY partnered with design architect BIG – Bjarke Ingels Group to build The Heights, a new secondary school in Arlington, VA. Architects in our Washington, D.C. studio leveraged a nuanced understanding of building science, local climate patterns and code requirements to develop a high-performance enclosure while avoiding potential problems. 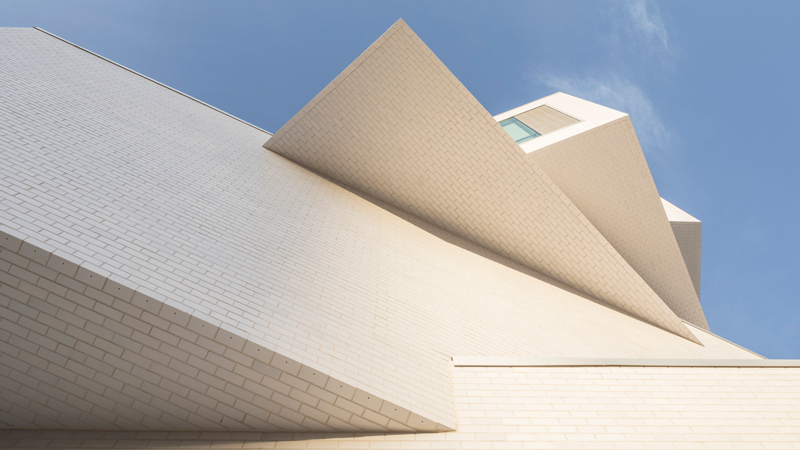 With LEED-Gold certification as its target, the Heights called for a very high-performance enclosure. From experience, we knew that a building enclosure in a mixed-humid climate like Northern Virginia faces challenges year round. In summer, hot, moist air threatens from the outside; in winter, relatively moist interior air threatens from the inside. The envelope must retard moisture in two directions, and condensation should only occur outside the air and water barrier.

Early in the design process we sought to determine where condensation was likely to occur. To do this, we created a draft of each wall assembly and then used LEO A DALY’s proprietary digital hygrothermal analysis tool to understand how moisture would behave as temperature changes through the wall section. 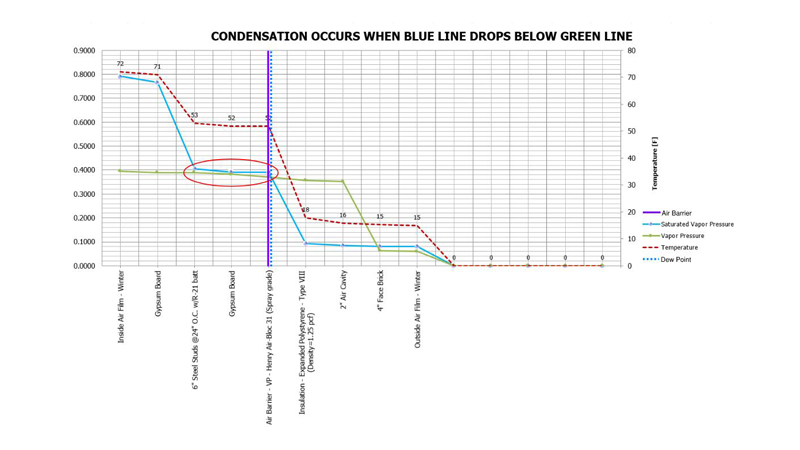 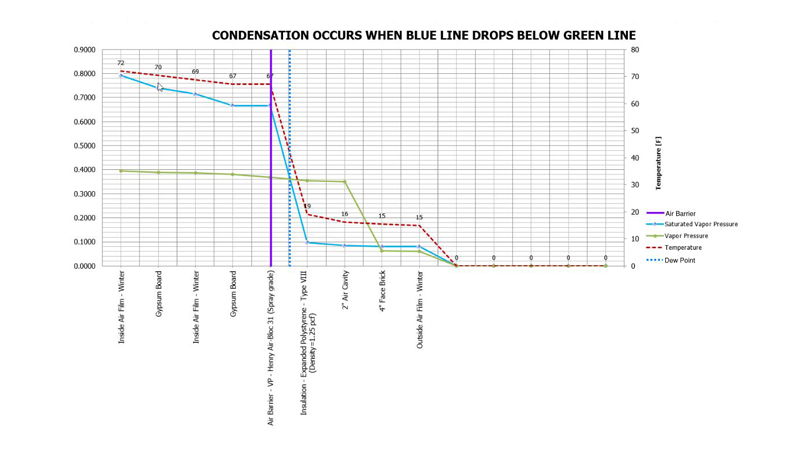 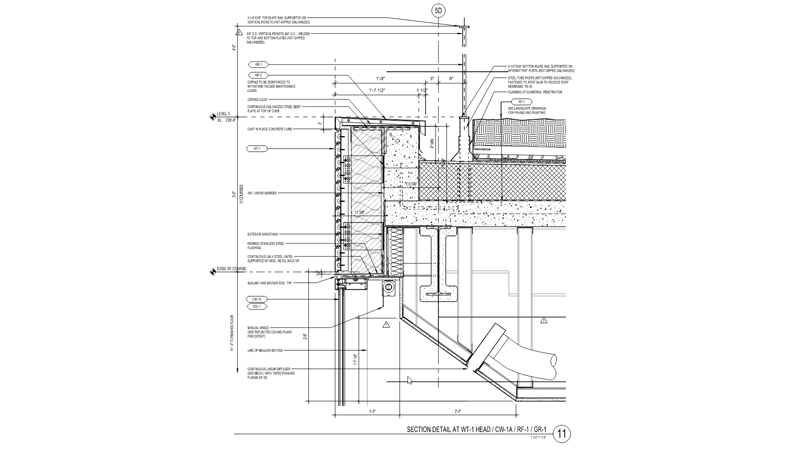 Based on this analysis, we identified a risk of condensation inside the air barrier. This can be seen in the first graph, where the blue line [saturated] drops below the green line [vapor pressure]. In this scenario, vapor pressure becomes nearly saturated throughout the insulated cold-formed metal framing, and condensation occurs barely outside the air barrier. We hypothesized that the Batt insulation – a component required by the energy code – would cause moisture to be trapped in the wall assembly without easy means of escape.

Our next step was to convince building officials that we should be allowed to proceed without the Batt insulation. The hygrothermal analysis turned out to be critical in making our case. We explained that the exterior continuous insulation (c.i.) provides a far higher R-value than required by the energy code (R-31 c.i. vs. R-7.5 c.i. plus R-13 Batts, with an actual Batts value about half that due to thermal bridging at metal framing); and that complying with the requirement for the interior Batts with this high an exterior c.i. value could lead to interior condensation.

This analysis convinced the building official that the intent of the energy code was more than achieved, and that requiring the interior Batts presented too great a risk of condensation inside the air barrier.  The official allowed the assembly to be built without the Batts. 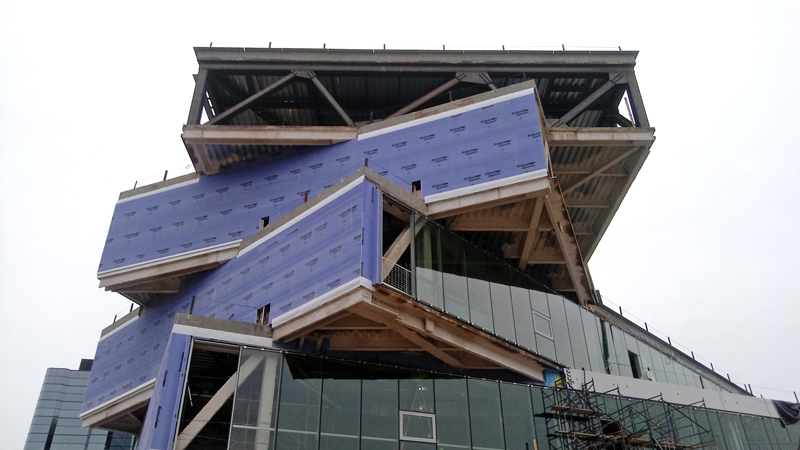 This should be a cautionary tale. Prescriptive code compliance doesn’t ensure adequate performance.  Building officials have discretion to allow variances from their adopted code requirements, but they require a cogent argument supported by data.

As we continue striving to improve the energy performance of our building enclosures while avoiding moisture problems, and as building owners become more sensitive to the dangers of potential condensation within their high-performance enclosures, architects must better understand and predict moisture behavior in enclosure assemblies. Tools such as hygrothermal analysis can be very helpful, especially when used early in design.

We ask a lot of our equipment and enclosures; it’s reasonable for them to expect a lot of us if they’re to perform as desired and have long useful lives.  Having user-friendly tools available from conceptual design through CDs for energy modeling, hygrothermal and finite element analysis of enclosure assemblies is invaluable in developing high-performance designs. 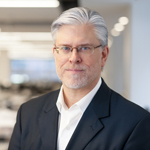 Tim Duffy, AIA, CSI, LEED AP is vice president, director of technical services with LEO A DALY. He has more than 35 years of experience as an architect and is based in our Washington, D.C. studio. Contact Tim at [email protected].