Recognized as one of the best works of federal architecture built this decade, the LEO A DALY-designed facility reimagines the National Guard readiness center for a new era of warfighting, peacekeeping and emergency response missions

The $200 million project will add three stories, a new skin and a vibrant mix of uses to a former government building

LEO A DALY will mentor the service-disabled veteran-owned, woman-owned design firm as part of the SBA’s All Small Mentor-Protégé Program 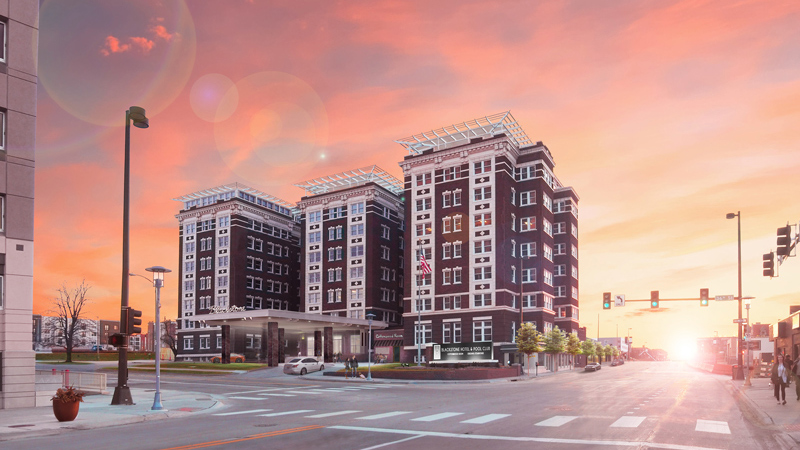 LEO A DALY has been selected to renovate the iconic Blackstone Hotel in Omaha. The $75 million vision by GreenSlate and Clarity development companies will revive the century-old hotel, which helped establish Omaha’s Gold Coast neighborhood, and is credited with the invention of the Reuben sandwich.

Excerpted from the Omaha World-Herald:

The century-old Blackstone Hotel, most recently used as an office building in midtown Omaha, is poised to be resurrected to its original use under a nearly $75 million plan by two Omaha developers.

Dwyer and Clarity’s Tom McLeay referred to other legendary Omaha hotels that have been converted to condos (like the Paxton), have fallen into disrepair or have been demolished altogether (like the Fontenelle).

The Blackstone, during its heyday, was host to visitors such as Bob Hope, Jimmy Stewart, Eleanor Roosevelt and Richard Nixon, who would ride in the hotel’s private car, a Pierce Arrow, and read its magazine, the Blackstonian.

An epicenter of social life for the Gold Coast elite, the hotel at 302 S. 36th St. featured an elegant ballroom, rooftop gardens and the Orleans Room restaurant.

Originally, World-Herald archives say, the Blackstone was a “residential hotel,” where guests rented quarters by the year. Apartments ranged from one to six rooms, all without kitchens because hotel services included cooking.

Developers hope to restore the ballroom, an old marble staircase and as many other original elements as possible.

In all, the reincarnated Blackstone Hotel would have 204 hotel rooms, the top-floor ballroom, a rooftop cocktail lounge, a coffee shop, a restaurant and conference center.

A swimming pool and fitness club in the newly constructed section would be open to guests and Blackstone District residents. Other guest amenities would include valet parking, concierge and poolside food and beverage services.

Parking for hotel and restaurant patrons would be on the surface lots across the street to the west of the redevelopment site, the plan says, in addition to new on-street parking on Harney and 37th Streets.

The development team says many design and other details are still being finalized. Leo A Daly is the architect and DLR will work on interior design. Completion of construction and renovation is anticipated by 2020.