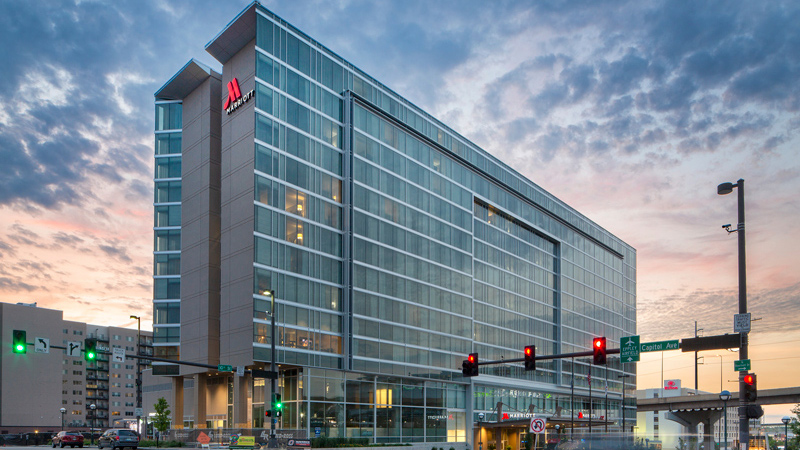 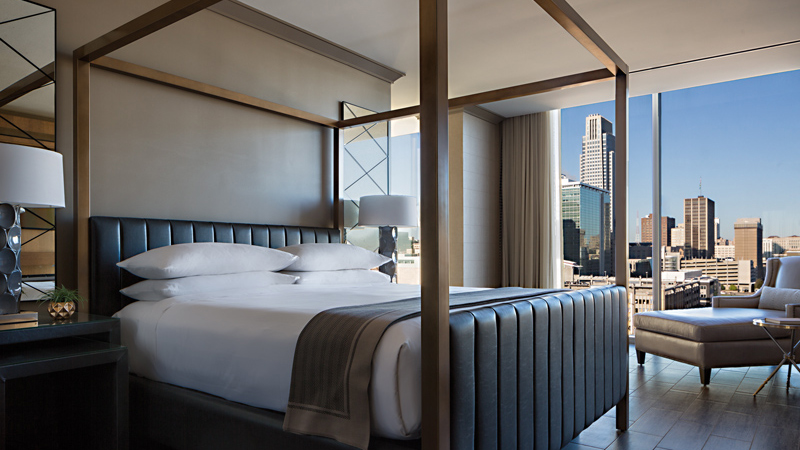 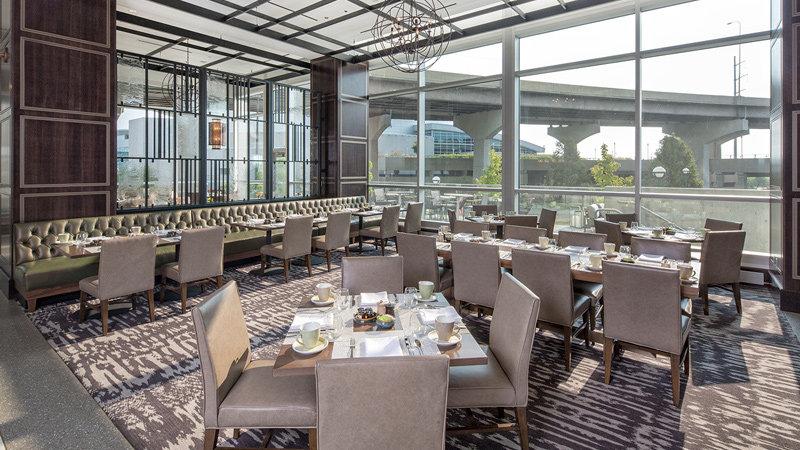 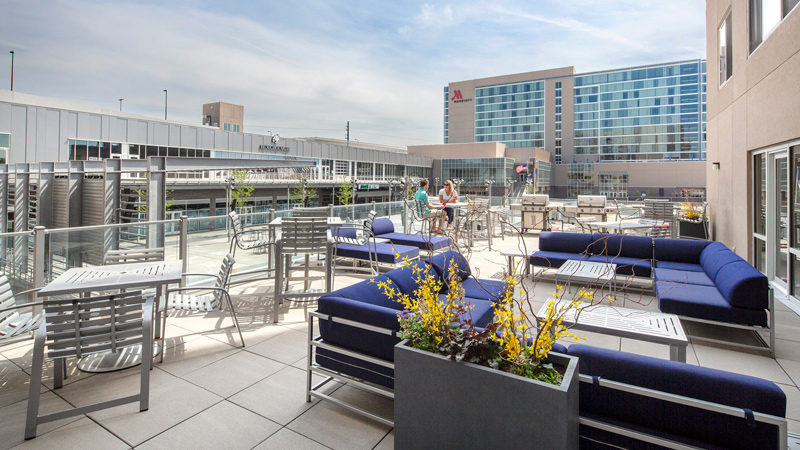 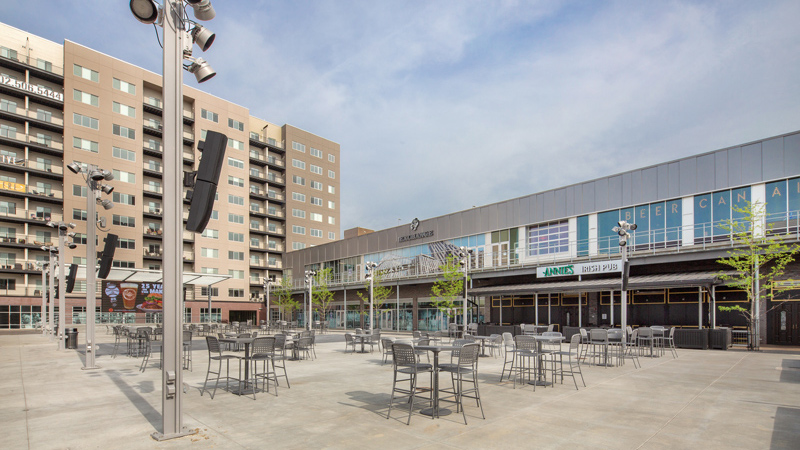 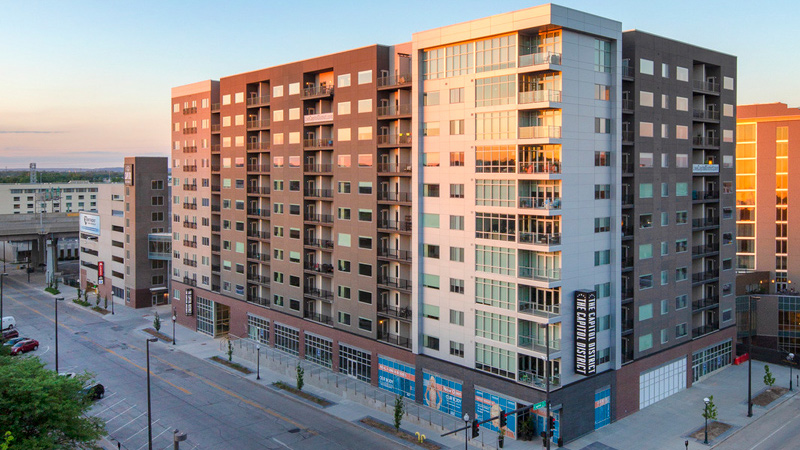 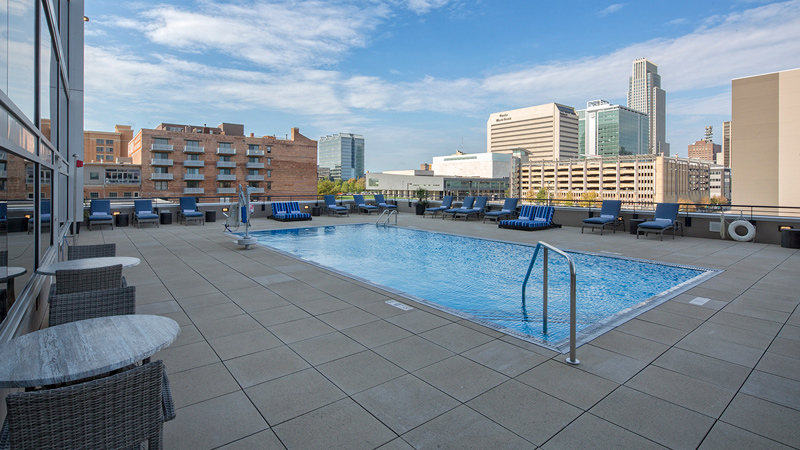 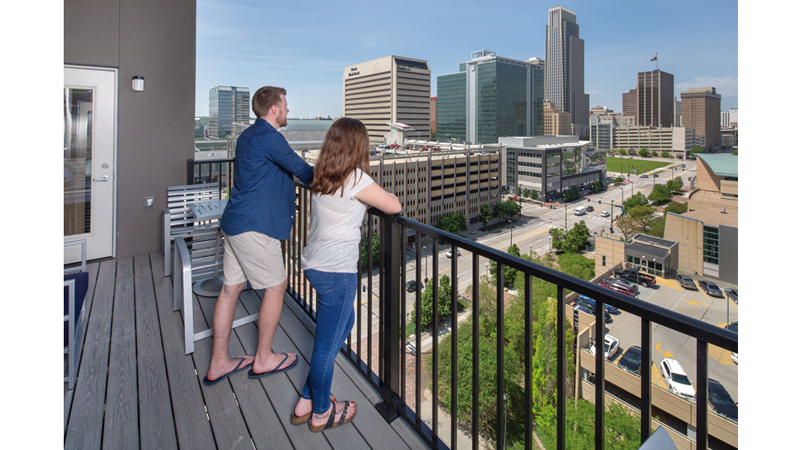 A new district is emerging in downtown Omaha. The Capitol District, a mixed-use development combining hotel, apartments, retail, office, and outdoor entertainment, will open in phases starting in August with the opening of the new premier full-service Omaha Marriott Downtown at the Capitol District. LEO A DALY provided master-planning for the District, as well as architectural, engineering, and interior design for the hotel, apartment building, and parking garage.

The iconic new 333-room Omaha Marriott Downtown at the Capitol District, which anchors the site, is slated to open August 8. The 12-story glass building is a significant addition to the downtown skyline, complementing the distinctive roofline of the Omaha Convention Center. The transparent building envelope creates a sophisticated presence along 10th street. “At night, the building takes on an elegant glow,” said David Hawes, architect with LEO A DALY.

The building’s “wow” feature, winged corners on its south side, enable breathtaking 270-degree views of downtown Omaha’s skyline that are unique in the city. The full-service hotel features over 17,000 square feet of flexible meeting space, hospitality suites, a roof top swimming pool with bar/entertainment area, full-service restaurant and bar and extra-large fitness center.

On the pedestrian level, the Omaha Marriott Downtown at the Capitol District is welcoming and transparent. “We were careful to create as much visual frontage as possible on the street level to allow people to see and be seen,” added Hawes. “The high ceilings make the lobby a ‘celebratory space’ with views to the convention center to the east, and the city skyline to the west.”

“Hotels are becoming social hubs, places to hang out before and after events, and just popular cultural hotspots in general. We wanted the design to encourage locals and visitors to mingle in a casual but sophisticated environment,” said Michelle Holmes, interior designer with LEO A DALY.

Marriott was recruited for the hotel expressly because of the full-service chain’s social, inviting vibe. “The Marriott brand is based around a ‘great room,’ and that’s exactly what we wanted the lobby to be – a social space for the city,” Holmes said.

Comprising three main uses – lounge, dining room, and bar – the different portions of the grand lobby spill over into each other to create a cohesive but intimate gathering space.

Local materials such as brick and iron bring the warehouse style of the Old Market into a sophisticated space, according to Holmes. Wood paneling hints at Omaha’s roots, but is tailored with modern sophistication in keeping with Marriott’s midcentury-modern-inspired aesthetic.

The Capitol District forms a critical link between the events district, Riverfront, Old Market, and downtown core, adding much-needed density to the two blocks between 10th and 12th Street, south of Davenport.

“We wanted to create a vibrant, walkable enclave that is unlike anything else in downtown,” said Hawes. “The design invites visitors who may feel isolated in the events district to experience the real Omaha, while also creating a comfortable, active place for residents to live, work, and play.”

Capitol District will be the first entertainment district in Omaha, taking advantage of a new city ordinance that allows alcoholic beverages outdoors. To complement the wide-open concept, the mixed-use design provides portals to entertainment that celebrates community use.

The hotel and 218-unit Capitol District Apartments bookend the District on the east and west, each offering public-facing retail and bar spaces that spill out onto a central plaza, which is designed to serve as a modern town square. The hardscaped plaza, inspired by other great outdoor venues across the country, will have programming year-round, such as ice-skating and outdoor concerts.

The buildings embrace the street at their base with strong, linear forms of masonry, glass and steel, “modern in form, but embracing the industrial heritage of the surrounding areas,” Hawes added.

A third, retail-focused building along the site’s north side is under construction and will come online in Spring 2018. The eight-level parking garage has been completed and will connect, via skywalks, to the apartments, retail building and the Omaha Marriott Downtown at the Capitol District. The final component, an office and retail building on the south side, is in the works.

Progress has been rapid on the Capitol District Apartments, which opened in July. Using a proprietary modular construction system designed and engineered by Prescient, general contractor MCL Construction was able to complete structural work on a floor per week basis to complete the building in record time.