The impact of QA/QC on project timelines

Web of history, politics and literature uncovered with NIGA renovation 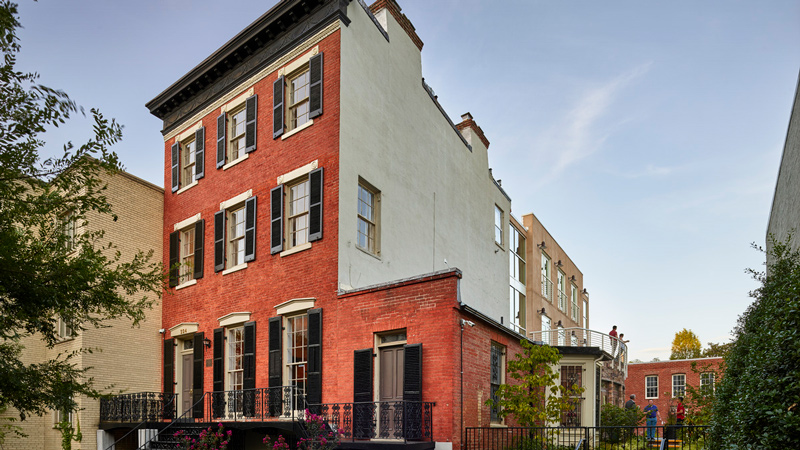 Preservation and expansion on Capitol Hill

More than two centuries of history, as well as modern amenities, lie behind the façade of a Washington landmark.

The historic façade of the Watterston House is shown in the foreground, while the new addition and landscaped terrace is in the background. Photos: courtesy LEO A DALY, Prakash Patel.

More than two hundred years ago, George Watterston, the third Librarian of Congress, his wife, Maria, and their six children, lived a few blocks south of the Capitol, in one of the earliest Federal-style mansions “on the hill,” as the Capitol Hill neighborhood in Washington, D.C., was then commonly called.

The property stayed in the family for nearly a hundred years. After several private owners, the Cato Institute, a libertarian public-policy research organization, moved into the property in 1981 before relocating to another building in 1993. In 1994, the National Indian Gaming Association (NIGA), a non-profit lobbying organization dedicated to advancing the rights and freedoms of Native Americans, bought the property. In January 1996, the house was added to the National Register of Historic Places.

Tasked with preserving the historic Watterston home, the team at LEO A DALY, Washington, was also responsible for building an addition to the main house, along with providing for underground parking. To accomplish these objectives, the LEO A DALY team faced several architectural and design challenges.

In doing so, little did they know that in preserving this historic building, they were also unearthing a part of American history: a complicated and intricate web of politics, literature, race, and slavery. 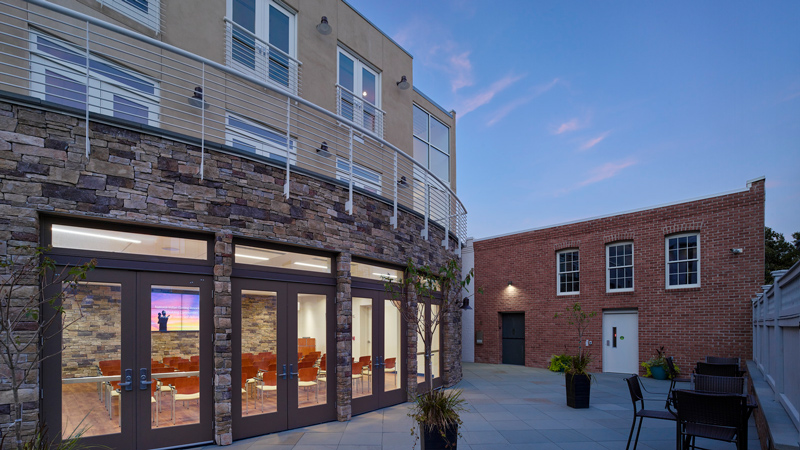 After occupying the Watterston House for about 15 years, NIGA sought to increase its presence on Capitol Hill. As a non-profit organization, NIGA lobbies Congress and presidential administrations on legislative policies that affect Indian gaming issues and tribal community development. To achieve these goals, NIGA needed to expand its physical operations. Its primary goal was to create a first-rate conference center that would allow tribes to converge and strategize on policy initiatives. Another objective was to offer a more permanent and sustainable parking solution for staff.

The three-story addition houses a two-floor multi-media conference space and executive offices on the third level.

Before even encountering the design of a new addition to the property, the Leo A Daly team needed to address structural and other damages to the historic main house.

The centerpiece of the addition, which is three stories totaling 10,000 SF, is a two-story multi-media conference center that can accommodate as many as 150 people. A meeting space of this magnitude is rare on Capitol Hill. On the ground level, the conference center opens to a landscaped terrace that supports indoor and outdoor events. On the second level, the center opens to an outdoor balcony. The third floor addition provides much-needed executive and administrative office space, with a Juliet balcony that aesthetically ties in with the rest of the addition’s exterior.

More importantly, the architecture and interior design of the addition serves as an effective transition, bridging the historic main house of the nineteenth century into the twenty-first century. 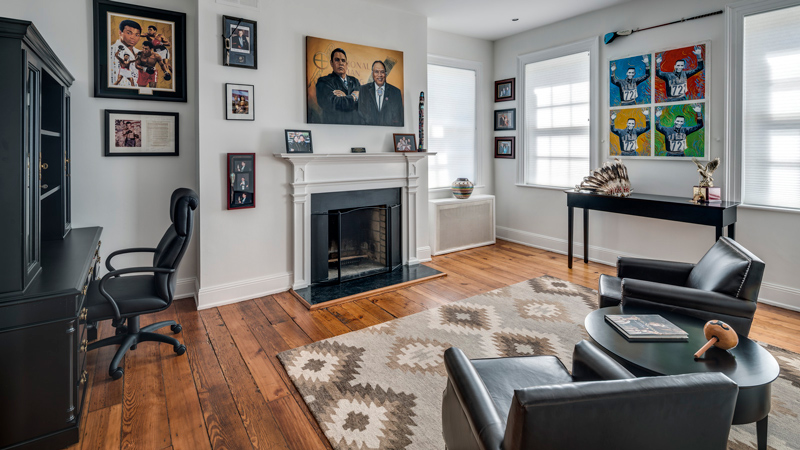 Watterston and his young wife, Maria, moved into the house in 1811, the year of their marriage. From the second and third floors of his house, facing northwest, Watterston could observe the Capitol’s construction. On days that he worked at the Capitol, he could take a short walk from home, where his wife took care of their six children (all born between 1815 and 1825; another child did not survive past its first year).

The Watterston House was ideal to raise a family, while still exuding the prominence and importance of a leading Washington political figure like Watterston.

There is no official documentation attesting to the original author of the building’s design, but Washington’s first city surveyor, Nicholas King, quite possibly designed it, as he was responsible for designing many of the city’s first mansions. Watterston’s father, David, who was a builder and part of the team responsible for the initial construction of the Capitol in the 1790s, could have helped build his son’s first home.

The Watterston House sits on a slight rise, on 224 Second St., SE. It is three stories high with a raised basement. Red brick of Flemish bond adorns much of the historic main house. The only exception is the building’s top 4 ft., which was added in 1906. Today, a cast iron porch runs across the main façade; in Watterston’s time, it was a wooden porch, still reached by the same stone steps in place today.

When entering the main level of the house, double doors open into the foyer, which leads through an arched opening to a mahogany stairhall that ascends all three stories of the house. To the right, off the main entrance foyer, are double living rooms with decorative cornices, fireplaces constructed of marble mantelpieces, and slated hearths. Watterston used this main level as his study and library, which ran the entire depth of the house.
The second and third levels of the house were used as bedrooms for Watterston, his wife, six surviving children and about a half dozen slaves. Each room contains a fireplace with wood mantels.

The transition from the historic main house added much need space and bridges 200 years of history. 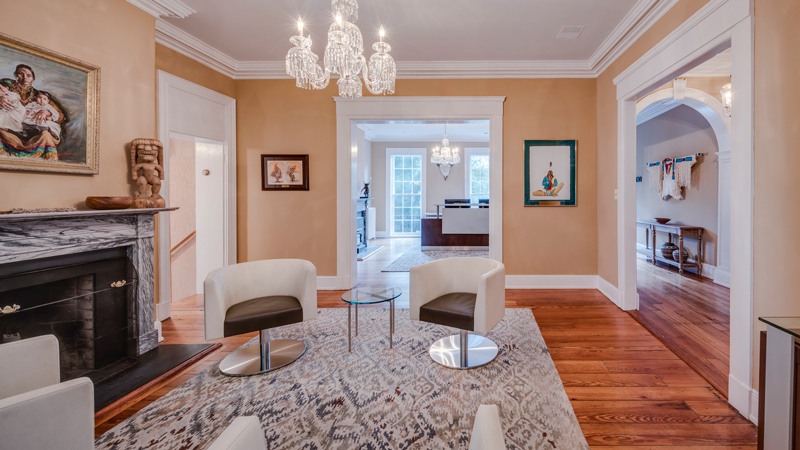 The most significant challenge to the design team was creating a permanent parking solution. The design sought to create an underground parking garage, accessible through an elevator at the rear of the property from the alley. A single car entering the elevator would be lowered into the below-grade garage.

To achieve this, the team had to demolish half of the carriage house, which was built in the early 1900s, in order to create space for the construction equipment to gain access to excavate the ground. Half of the original carriage house remains, converted into office space, and a modern addition, designed to mirror the main house’s redbrick aesthetic, was built adjacent to it.

The underground garage holds spaces for eight vehicles. Cars exiting the garage simply drive into the elevator. Seconds later, the elevator hoists them up to ground level, and they pull out into the rear alley.

The Watterston House is historically significant because of its association in the nineteenth century with one of the Federal City’s most distinguished citizens, George Watterston, who took a major role in the political and literary life of the Capitol. The renovation of the Watterston House retains its original architectural integrity. Walking into the historic house is like stepping back into time.

It was within these walls that George Watterston raised two families: his white one of six children, and his black one of two. Now, instead of being filled with books and collections from its white owners and serving as living spaces for its enslaved servants, Native American paintings, artifacts, and artwork rest atop its fireplaces, adorn the stair halls, and enliven its rooms.

“The Watterston House serves as more than the headquarters of NIGA; it is a museum, a collection, and celebration of Native American peoples and their culture. Through the practice of architecture, we have the opportunity to shed light on the unwritten documents of history,” a LEO A DALY description of the project states.

Formerly a family bedroom, this room of the original main house is now a private office. 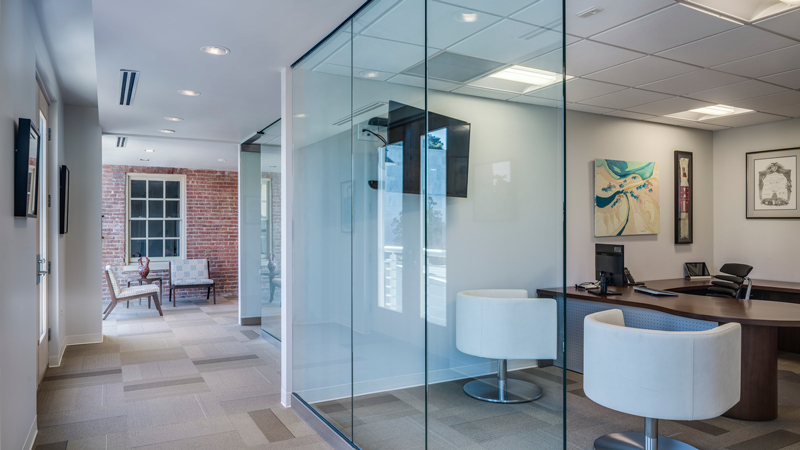 His home was not only where he and his wife raised their children; it is also where he raised two other children born from a relationship with one of his female slaves, E. Clarke, a half-black, half-white slave purchased by Watterson’s wife from her cousin’s estate. Two children, listed in records as “quadroons,” meaning they were only a quarter black, born from a half-black mother and a white father, were later recorded. Census records suggest that E. Clarke eventually became a free woman, as did her children by Watterson.

The complicated relationship between the two families ended with Watterston’s death in 1854. But if not for the sake of historical documentation, a striking resemblance between Mary Clark (his second daughter) and George Watterston, and the preservation of their home, this story, which is part of the historical fabric of American history, could have been lost.

When Watterston died in 1854, the property passed to his son, David. It remained in the Watterston family’s hands for almost a hundred years until 1905 when a lawyer, Patrick H. Kennelly, purchased it. Under Kennelly’s ownership further modifications were made to the property.

A three-story bay window, with a flat roof, was constructed on the rear side of the property; an outline of the bay window was included in a 1908 building permit. In addition, in 1916, Kennelly erected a stable and a two-story garage, called the carriage house, at the rear of the property.

The stable and garages (all of which open to the alley) were part of the historical development of the Watterston House. They are contributing structures to the historic nature of the original property. 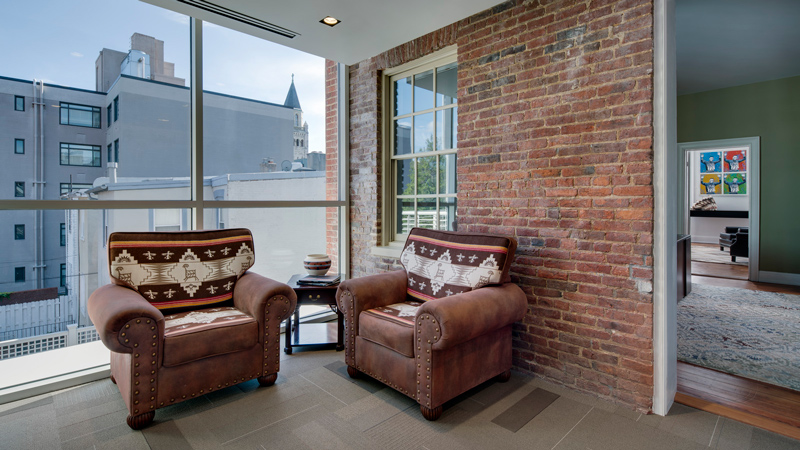 An early resident of the newly created Washington City, George Watterston was born in New York in 1783 to a Scottish father, David, a builder, who moved the family to the capital city in 1791. Two years later, the young George witnessed President George Washington laying the cornerstone of the future Capitol building.

Trained as a lawyer, Watterston’s real passion was literature. His poem, “The Wanderer of Jamaica,” published in 1810 and dedicated to First Lady Dolly Madison, caught the attention of her husband, the President.

A series of subsequent events led to Watterston’s fame and notoriety in Washington’s social circles. In 1814, as the British marched through the Capitol, burning it and the nascent Library of Congress, along with the White House, Watterston fought to defend his city to the best of his abilities. His patriotism and ode to Mrs. Madison led the President to appoint George Watterston to be the third Librarian of Congress.

Watterston’s immediate responsibility was to organize the approximately 6,500 books donated by former President Thomas Jefferson from his personal collection for the new library. Watterston cataloged the collection just as Jefferson wanted. Watterston remained in his position as librarian for 14 years, until 1829.

In addition to serving as Librarian of Congress, Watterston spent much of his career in other public and non-government institutions. He was president of the board of alderman, served on the city council, and was the founder and first secretary of the Washington Monument Society. He lived to see the Washington Monument reach a height of about 150 feet.