Based on intensive research of Carson’s brand and values, LEO A DALY developed the “Ascend” design concept for Carson headquarters to embrace a thriving company. Symbols of growth and transparency enclose features and amenities that support work, life and play.

An electrochromic glass envelope tints organically in response to changing concentrations of daylight. With no need for window coverings, every perimeter view is unimpeded. Our energy and lighting models accounted for the reduced heat gain and glare, which led to tailored solutions such as reduced energy HVAC. The transparent skin invites ample interior daylighting to a mix of private and collaborative workspaces, while conveying outwardly Carson’s value of transparency.

Founded by Ron Carson in Omaha in the 1980s, Carson today comprises 1,400 member firms, more than 110 partner offices, and it manages $18 billion in assets. Visitors to the new headquarters from Carson’s partners, advisors and coaches will be frequent and common. Its campus will reflect and support its culture while also making lasting impressions on visitors.

LEO A DALY’s design for Carson headquarters earned the moniker “Ascend” based on its upward-sweeping rooflines, which reference Carson’s “guided by growth – live life by design, not by default” value. The development of the structural framing system used cantilevered steel members to enhance the “Ascend” design concept. When viewed from the north and south facades, the cantilevers project a “hovering” quality while minimizing vibrations for the open-office setting.

Integrated amenities such as courtyards, a rooftop terrace and the central amenity zone reinforce Carson’s passion for its people and its obsession with the client experience. Carson’s “family” philosophy toward its employees informs the interior design. Public areas are designated as “living room,” “front porch” and “kitchen table,” and the materiality is light and open, with natural wood accents lending warmth, like an invitation, especially when made visually prominent by streams of daylight.

Orientation of the campus opens southward, maximizing diurnal cycles in all of Nebraska’s four seasons. From higher elevations, it also offers sweeping views of Heartwood Preserve, the adjacent 500-acre mixed-use development. Mobility connections within the development and the nearby 144th Street shared-use trail will offer multimodal commuting options. 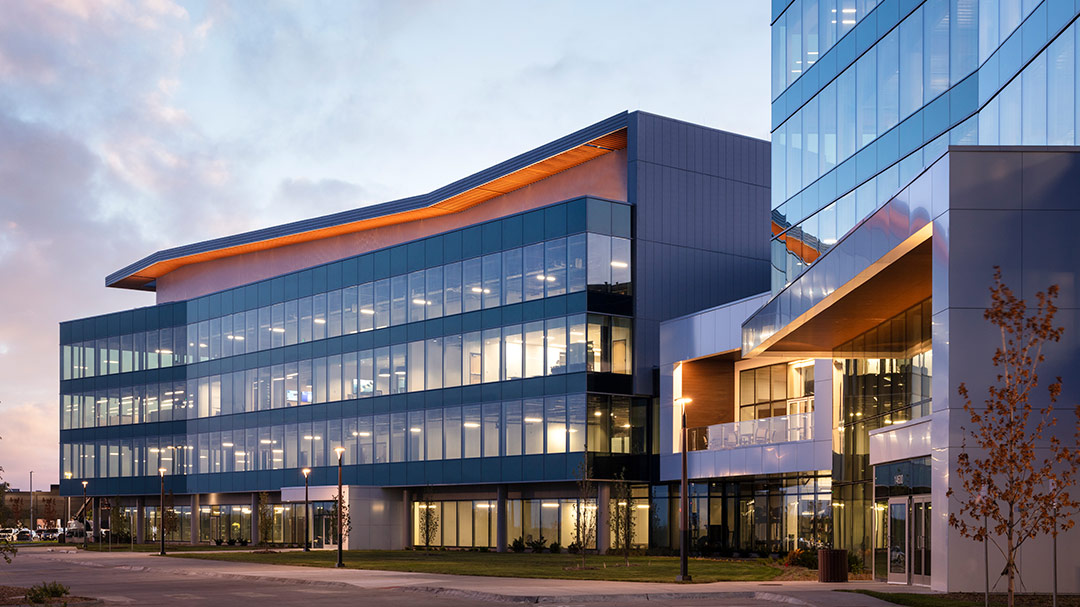