Resilient Design – What is resilience?

Case study: the workplace of the future

Municipal facilities must strike a delicate balance between openness and security 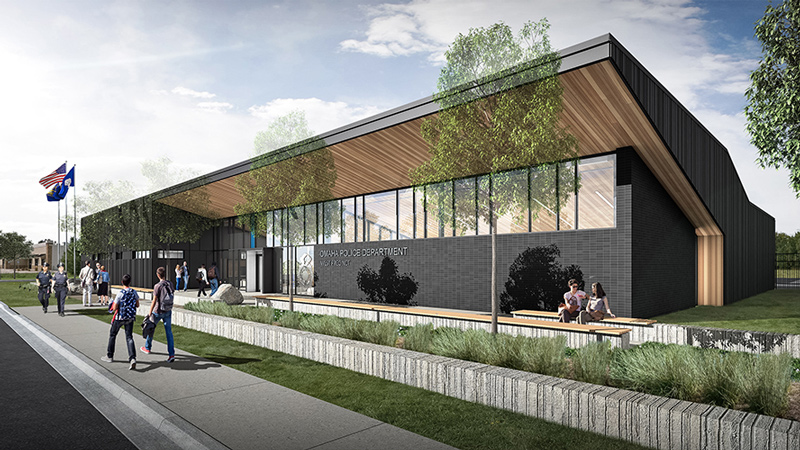 City services buildings such as police and fire stations, libraries, city halls, and medical examiner’s offices are important touchpoints for the communities they serve. In some respects, they define the character of the government and color the interactions between citizens and public servants. One of the main architectural challenges of designing buildings for the public sector is designing buildings that embrace the community through their public-facing functions while maintaining the security, functionality, and financial stewardship expected by administrators and taxpayers.

In this article, I’ll share insights from some recent LEO A DALY projects that blend the unique program requirements of high-performing city governments with prominent community functions of beloved civic architecture.

Blending the public and private functions of a highly secure, highly visible city department is a fundamental challenge of civic architecture. Many projects err on the side of security, resulting in facilities that feel imposing and unwelcoming. A more nuanced design approach looks for opportunities to create transparency, offering a more welcoming curb presence that integrates passive security features.

The Omaha Police Department’s West Omaha precinct serves as home base for SWAT team, traffic patrols and detective work in the western suburbs of Omaha, Nebraska. It also functions as a hub for public-focused activities such as community meetings and televised press conferences. This dual role inspired a design that is both secure and inviting – keeping officers safe while looking great on TV. 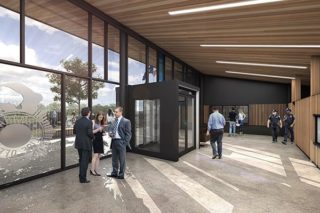 At the outset of design, we conceived of the building program as comprising two functional zones – public and private – that are reinforced through the expression of material and form.  Public spaces are distinguished by wood and glass, while private spaces use a more utilitarian language of introverted brick and metal-clad masses with strategically located window openings. The design also uses landscaping and different levels of separation or transparency to reinforce the contrasting functions of the building’s different zones.

The station is foregrounded by a sort of mini park that doubles as a passive security feature. Inviting bench seating and short concrete walls at varying heights offer a place to eat lunch or chat, while also protecting the building from vehicular ramming. The roof line of the building, with its dramatic upward sweep and warm wood soffit, is a gesture of invitation to community. The soffit flows from the exterior to the interior, forming the ceiling of a large community room. This volume is enclosed by a façade of brick on the lower half and clerestory above, presenting a solid but transparent face, and allowing natural light to fill the space.

Beyond the reception desk, the building becomes gradually more security-forward, with offices, training space, traffic patrol office, and the SWAT zone. Windows are limited to a narrow horizontal band, allowing some natural light to enter without compromising security. Police parking occurs beyond a secured perimeter set back from the public front of the building.

Some municipal complexes co-locate multiple services in one large building – great for efficiency and convenience, but with a risk of creating a monolithic government presence. Thoughtful architecture can help citizens differentiate among the various government functions, improving public image and creating new opportunities for community engagement. 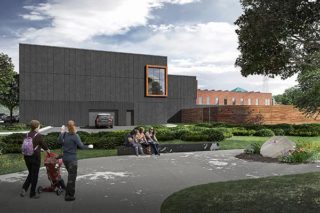 An existing municipal complex in Oakdale, Minnesota, was running out of room for the police, tax assessor, city hall and council chambers that were housed there. The addition of a new indoor training facility, squad car parking garage and administrative zones gave us the opportunity to reimagine the face of the department by reimagining its city services building.The station, located adjacent to the park, is set off with a memorial to a fallen officer at one of the main park entries, transformed how the public views and interacts with the police department.

In the existing municipal complex, the police station did not stand out from the other functions, resulting in an anonymous, overbearing architectural presence. Our planning study for the addition involved digging into the history of the department and its neighborhood context. Through this process, we saw a chance to use architecture to highlight the police function and underscore the importance of its mission. 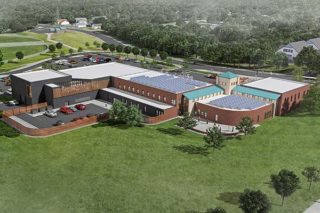 The police addition is situated on the edge of a public park named after Richard Walton, an Oakdale police officer who was off duty when he was killed in the act of preventing a crime in 1982. To highlight that piece of civic history, we integrated a memorial plaza into our design between the park and the police station. With this gesture, the police department reaches out to the public, and gives visitors to the park an opportunity to reflect on the role of police in the community. Together with a new charcoal-colored concrete façade, the memorial identifies the police station and adds depth to the department’s image.

Beyond providing a functional response to space needs, civic architecture also serves as a city’s most permanent and prominent billboard and storytelling tool. Thoughtful design allows cities to leverage their buildings to communicate strategic messages in a powerful way.

One small Minnesota town engaged LEO A DALY to design a new station for its all-volunteer fire department. As an all-volunteer force, the department is in perpetual need of new recruits. This need inspired a design concept that creates, in effect, a micro-museum within the station, where the the collected historical artifacts of a hundred years of volunteer fire fighting are displayed as a public recruitment tool.

The station is situated at a prominent roundabout on the town’s beloved trail and park network. Taking advantage of this location, the proposed design creates a pocket park at this intersection. Landscaping creates a rest area and water-filling station, where cyclists and runners can take a break. A transparent façade allows passers-by to look in on historic helmets, a 1920s fire truck and other artifacts. At night, the space is illuminated, creating a lantern effect.

Seeing history on display in such an inviting setting would build good will for the fire department among multiple generations of potential volunteers.

A measure of comfort

On the surface, some municipal building types do not lend themselves to engagement with the community. The medical examiner’s office, for example, is mostly composed of windowless lab space for conducting medical investigations. However, the small public spaces that are part of a medical examiner’s facility serve an outsized role in community engagement. Designed well, they help cities show a caring face and make a difference in the lives of citizens.

The public areas of a medical examiner’s office are unique among civic spaces. They host citizens on what might be the worst days of their lives. Bereaved people arrive with the unenviable task of identifying a body – often that of a loved one. They enter in an emotionally vulnerable state, possibly in shock, and certainly with a high level of anxiety. The design of these areas requires a delicate, compassionate hand.

The Hennepin County Medical Examiner Facility is designed to offer members of the public a measure of emotional comfort in the midst of hardship. Beginning with the landscape, visitors are surrounded by nature, shepherded toward the front door by a short retaining wall evokes a memorial. Copper overhanging the entrance and wooden detailing immediately bring a sense of warmth to the visitor and signify entry. Upon entering the lobby, the visitor’s views are reoriented to the exterior, toward a specimen oak tree. Waiting room seating looks out on this tree, growing amid a field of native grasses, creating a moment of quiet contemplation in an otherwise stressful process. 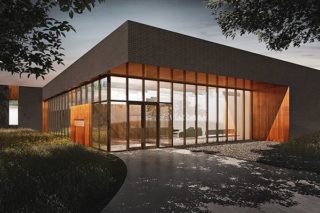 At its simplest level, a city provides a service. The better public servants can connect with the people they serve, the better the community will function. Architecture facilitates those connections in many ways – by giving city governments a physical identity, by creating inviting settings for citizens to participate in public life, and by communicating, in ways big and small, the values we live by. The designer’s fundamental role is to deliver a functional, efficient facility, but it goes beyond that. Our real challenge is to deliver more value without adding more cost, creating spaces that embrace, and are embraced by, the communities that fund and use them.

Daniel Yudchitz, AIA, NCARB, LEED AP, is a senior design architect in LEO A DALY’s Minneapolis studio. He can be reached at DLYudchitz@leoadaly.com.