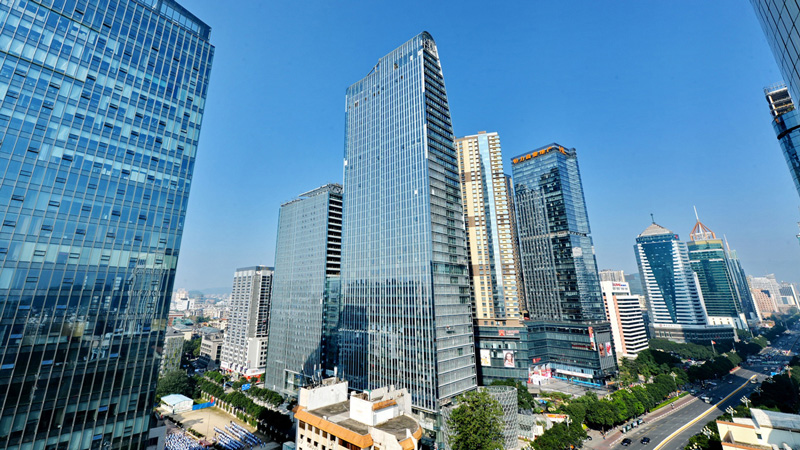 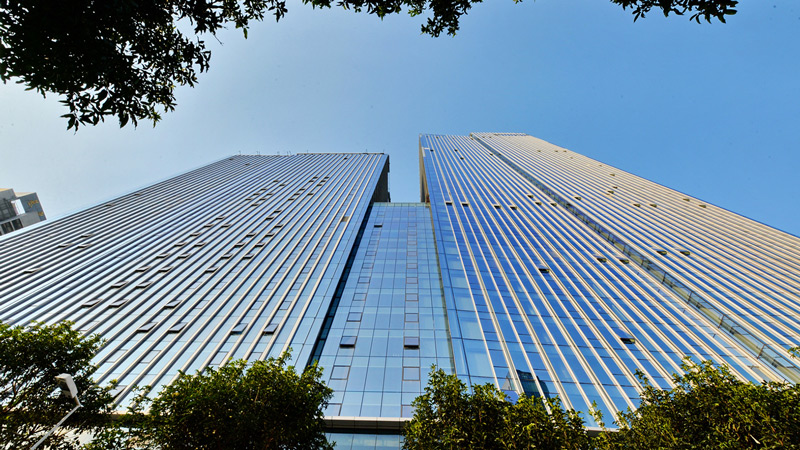 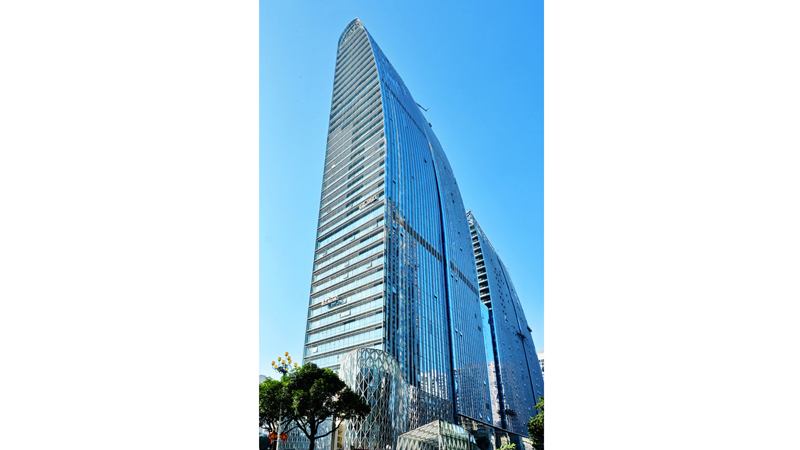 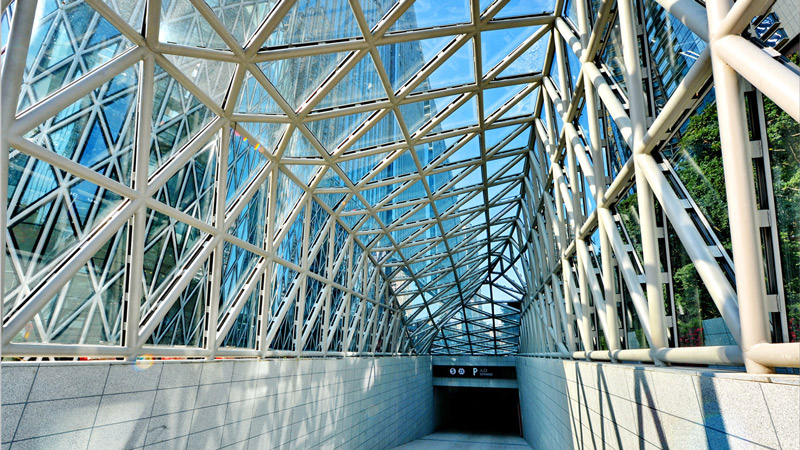 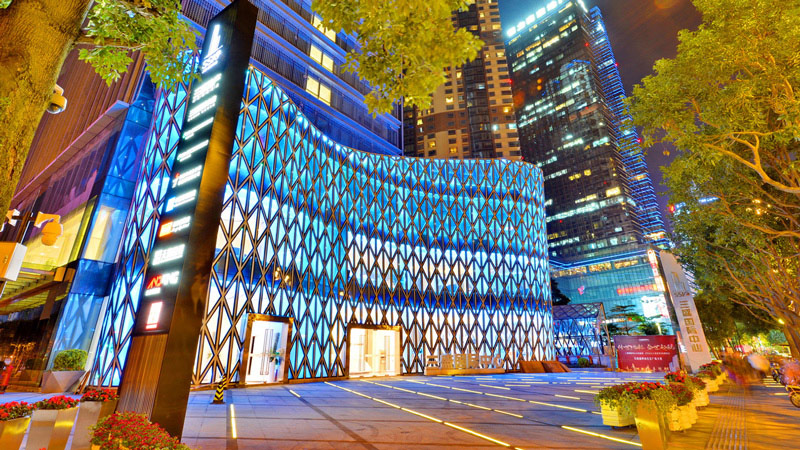 Shoushan stone carving is one of the superexcellences Fuzhou, the capital city of China’s Fujian province. The ancient art form uses as its raw material a precious, translucent stone quarried in the northern suburbs of the city. The elegance and craftsmanship of Shoushan stone carving provided design inspiration for a pair of iconic new towers in Fuzhou.

LEO A DALY’s design, conceptualized as “twin peaks,” comprises a 40-floor, 155M commercial tower and a 28-floor, 100M government office tower. Its form evokes the image of twin mountain peaks rising up in tension as beacons on the horizon. The smooth curves of the northern side reflect the smooth, supple character of Shoushan stone sculptures.

The constraints of the tight, urban site – long and rectangular – provided the footprint for the development. A solar envelope analysis guided the smooth, tapering shape of the buildings’ north side. The shearing of the main tower forms into two equal parts serves to create an underlying tension between the two masses and breaks down both the north and south facades of each tower into smaller pieces. Efficient use of the site resulted in the development meeting the maximum allowable Floor Area Ratio of 11.20. 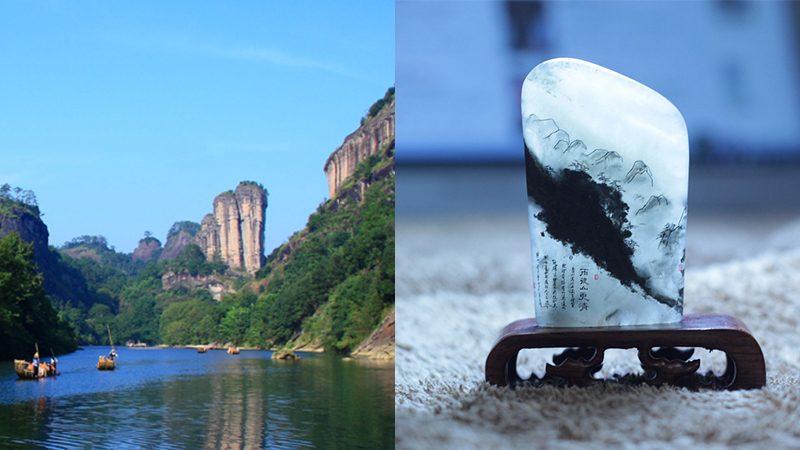 The commercial office tower, designed to standards for Class A office buildings, is approached and entered from the north plaza. The grand office lobby lies directly beneath the split of the two tower forms and contains an interior open space of 14.5M tall that connects directly to the main, 3-zone elevator lobby.

The split core layout of the commercial office tower serves to maximize usable open office space on each floor while pushing parts of the service core to the east and west facades. Glazing on the north and south is structural silicone glazed, unitized curtainwall system detailed to emphasize the verticality of the tower which effectively wraps the entire building from north to south. The roof parapet projects up to create an iconic void on the east and west facades where the massive structures holding up the parapet become highly visible at night. The east and west sides of the tower are glazed with an iconic curtainwall that stands out from a distance and is equally stunning up close because of the “jewel-box” quality of intricate detailing. 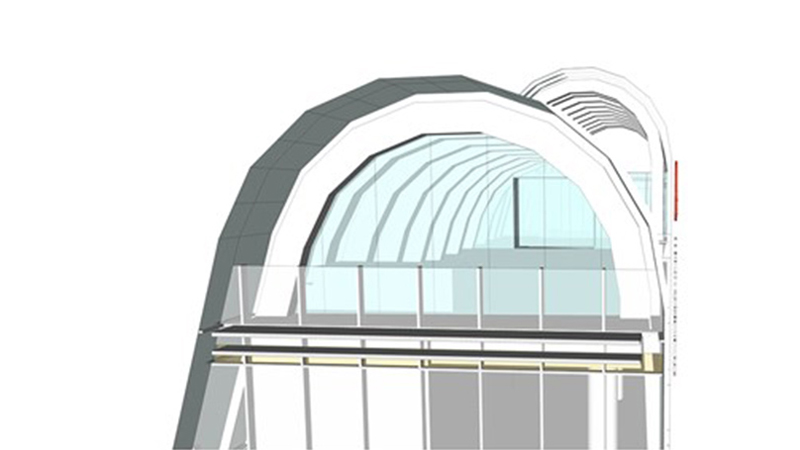 Entry to the government office tower is similarly from the north plaza, or via the below grade parking levels into the 9M tall main lobby. The classic layout of a central core works well to create a desirable office depth for Chinese government use while containing all service functions within. A form rising between the two towers provides a centrally located 400-person meeting space for government uses. The government office tower is clad with an architectural metal system with a similar spacing as the main office tower. The addition of more metal, as well as a shadow-box spandrel panel creates a sophisticated design which echoes the East tower, however with better economy of materials.

The retail podium occurs within the first 3 levels of each tower, and within an additional form on the east, a highly visible part of the site for flagship retail stores. Leasable areas have been maximized and can be accessed either internally, or from the street. In addition, retail at B-1 contains large, highly desirable space for larger tenants and is at the base of the atrium where it receives natural light from above and enjoys a direct external connection to neighboring retail sites. 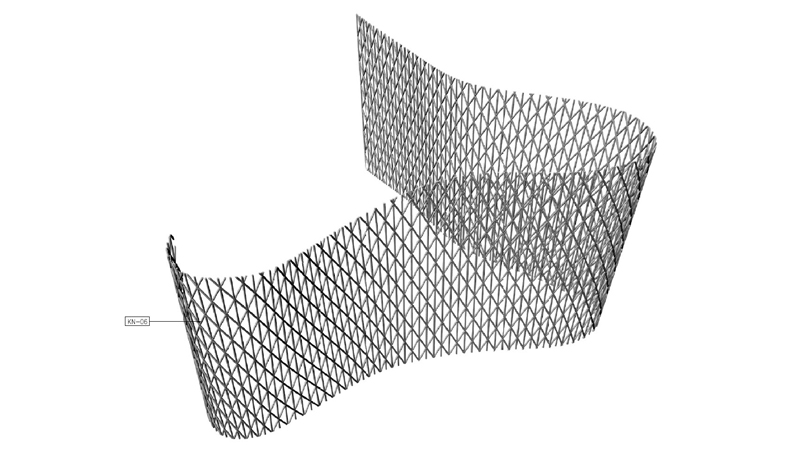 As an extension of the architecture, the landscape design serves to bring an energy to the exterior spaces surrounding the building and shape the experience of the individual by immersing them in environments that are spatially and materially engaging. This is achieved through stone patterning which echoes the shearing nature of the building forms to create large open plazas, and careful selection and organization of vegetation. Arrangements of new and existing trees form permeable transitions between the site and the greater urban context at scales of the pedestrian and automobile. Site art is located in strategic places such as above the basement automobile ramps for creative design of canopies with cutting edge use of materials and forms.

Image of Wuyi Mountain used under a Creative Commons license. Attributed to httpcc.nphoto.netview200811128.shtml.

Back to Design Index 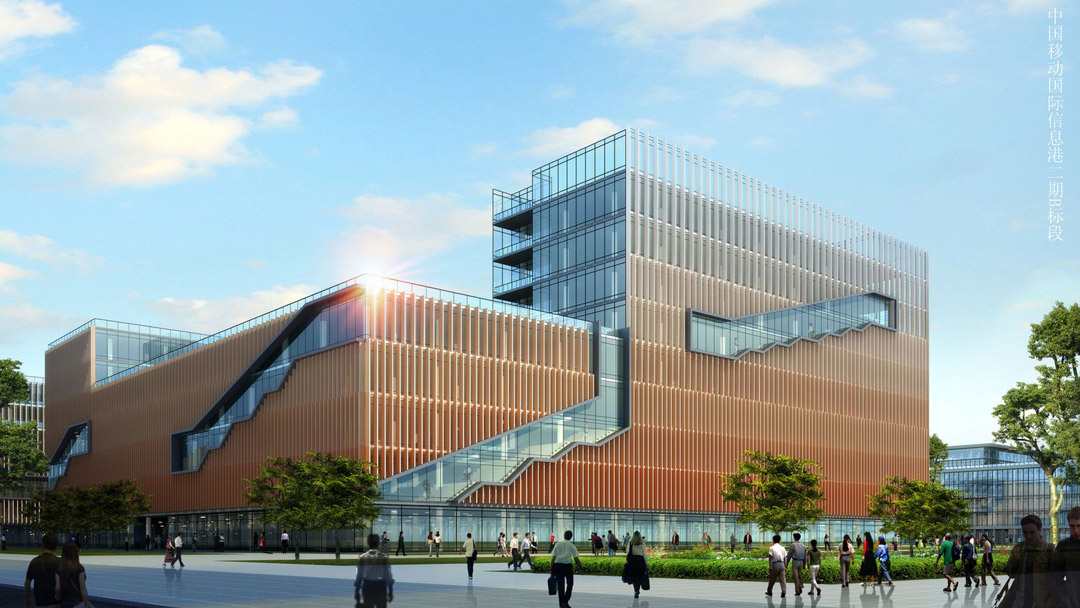 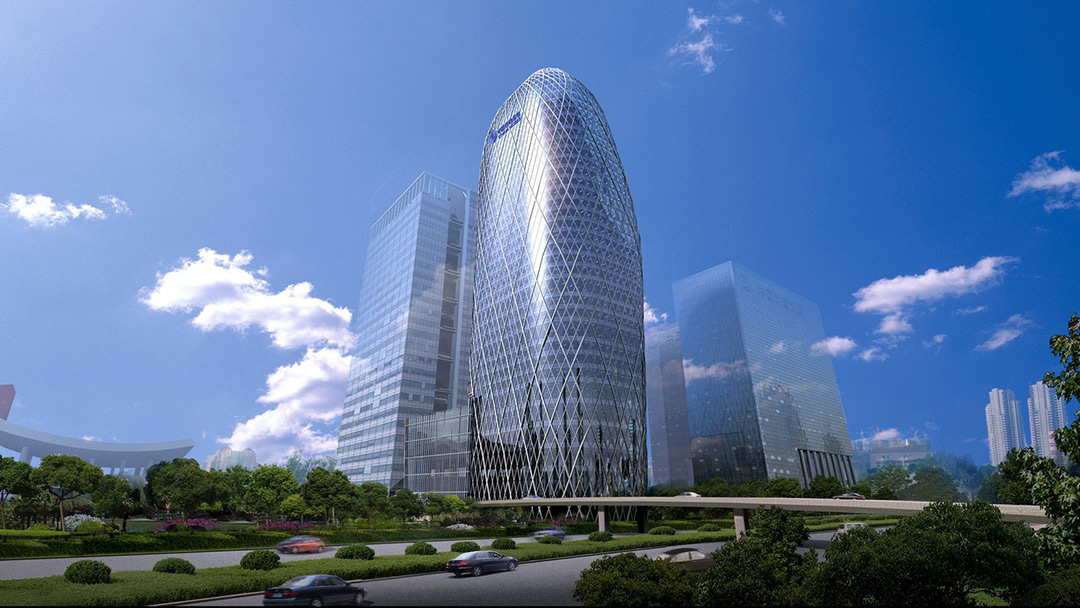 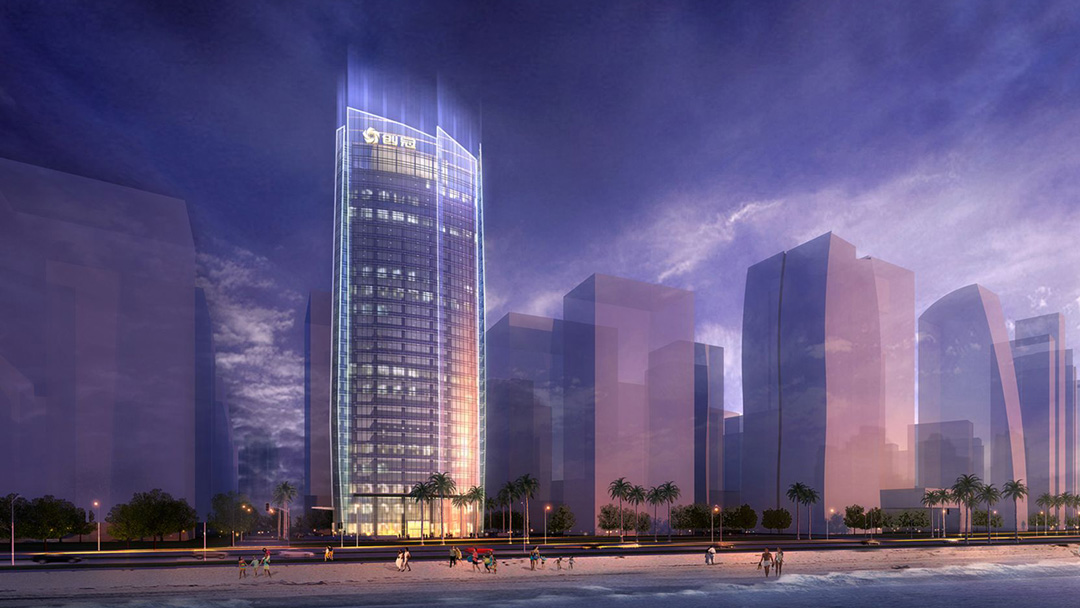 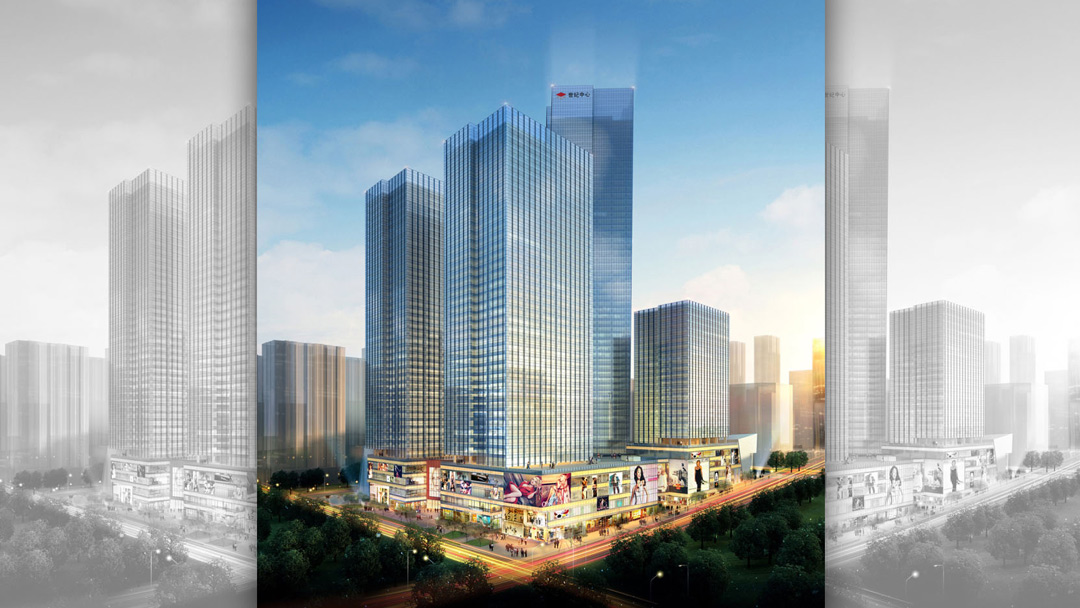 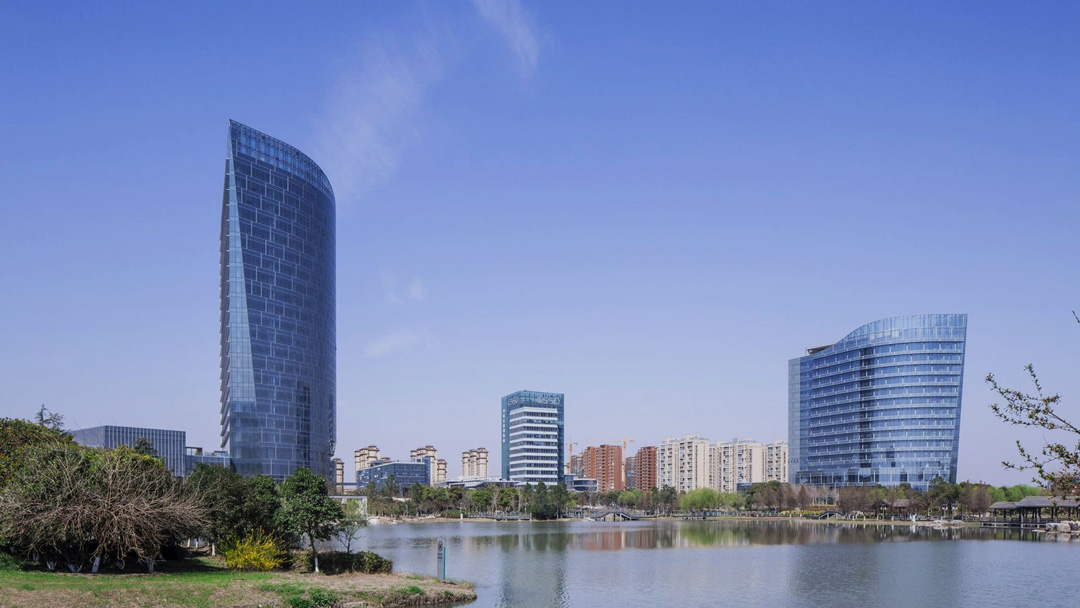 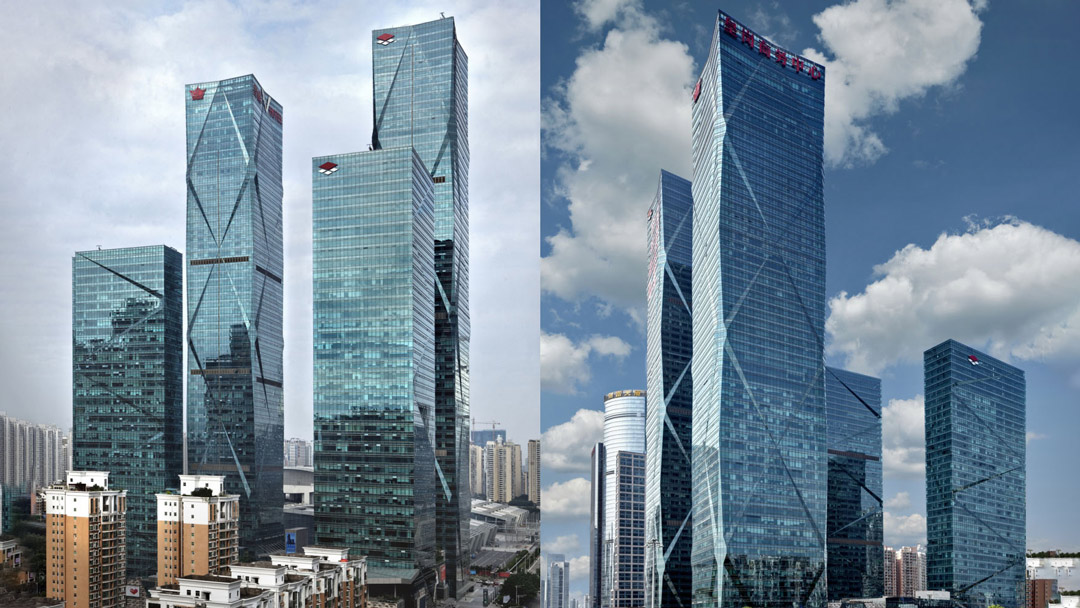