Don Hensley, AIA, joins us as managing principal in Dallas

Doug Nelsen named to “40 Under 40” from Consulting-Specifying Engineer

The AE NEXT 2021 contract supports the Department of the Air Force’s missions worldwide with facility and infrastructure improvements.

John A. Somerville announced as next Chief Operations Officer

Somerville brings over 25 years of experience in design, operations, growth, client and business development within the planning, design, and consulting practices.

John A. Somerville announced as next Chief Operations Officer

Somerville brings over 25 years of experience in design, operations, growth, client and business development within the planning, design, and consulting practices.

The Advisory Board shares the fascinating backstory of the Nebraska Biocontainment Unit, now being used to treat Coronavirus patients 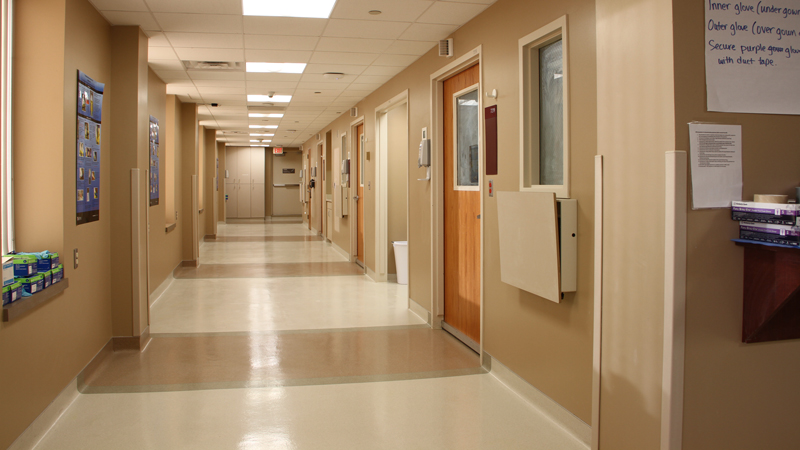 The following is excerpted in full from the Advisory Board article:

Nebraska Medical Center (NMC) made headlines in 2014 for being a leader in treating Americans who were infected with Ebola. Now, the hospital is being tapped to evaluate 13 Americans who were exposed to the new coronavirus—leading many to wonder why the Omaha-based hospital is consistently tasked with treating some of the toughest infectious diseases.

After Sept. 11 attacks, officials ask themselves, ‘what if?’

About 20 years ago, shortly after the Sept. 11, 2001 terrorist attacks, U.S. doctors and public health experts started to realize that the United States did not have a location to treat specialized viral outbreaks, the Associated Press reports.

NMC officials were among those who began to question what the country would do in the face of bioterrorism threats, such as anthrax attacks, and in international health emergencies, such as the SARS outbreak that occurred in the early 2000s.

“What … happens if an employee or staff member gets exposed to one of these agents, or even worse than that, gets infected, where are you going to put them?” asked Jeffrey Gold, chancellor of the University of Nebraska Medical Center. “You can’t just call up a local hospital and say, ‘I’ve got somebody who has anthrax, make up a bed,'” Gold added. “You need facilities that can do everything from air and water handling to the complexities of waste disposal.”

So NMC officials took action and, with support from CDC and the Nebraska Department of Health and Human Services, built a specialized biocontainment unit in a then-empty wing of the hospital.

The $1 million, 10-bed unit may look like a normal hospital ward at first, but it has distinctive features such as concrete walls, filtered air, doors that are able to function as an airlock, and a separate space for clinicians to shower and change. The biocontainment unit also features video feeds that link patient rooms to the nursing station and allows patients to communicate with loved ones while they are quarantined.

The unit made NMC uniquely capable of handling patients who were exposed to or infected with highly infectious diseases—but it wasn’t until 2014, when Americans in West Africa contracted Ebola, that the unit was put to use.

At the time, NMC was the “largest of four high-level biocontainment patient care units in the” United States, NPR’s “The Two-Way” reports. NMC also is located near Offutt Air Force Base, making it easier for the hospital to coordinate with the U.S. military to respond to disease outbreaks, according to the AP.

NMC ultimately treated three Americans who returned from West Africa with Ebola, including one doctor who was infected with the virus. According to the Times, “[n]urses wearing face shields, water-resistant gowns, and three pairs of surgical gloves treated” the patients.

After the West Africa Ebola outbreak, NMC mainly used its biocontainment unit for training and planning activities to prepare for future disease outbreaks. In addition, the hospital earlier this year opened a $20 million, 20-unit quarantine facility near the unit—making NMC even more prepared to respond to potent pathogens.

Now, NMC once again is putting its biocontainment facilities to work.

U.S. officials on Monday transported 13 Americans who were exposed to or tested positive for the new coronavirus on the Diamond Princess cruise ship to NMC for evaluation. The patients had been detained on the ship for days in Yokohama, Japan, where there are more than 400 cases of the virus.

According to the Times, NMC is treating at least two of the patients who are “more seriously ill” in its biocontainment unit and is monitoring the rest of the evacuees at its 20-bed quarantine unit. Patients in the quarantine unit will remain under quarantine for at least 14 days, unless they test positive for the new coronavirus.

The quarantine unit resembles a college dorm, with each room containing wood furniture and one bed, the Times reports. The rooms also have exercise equipment, like a treadmill or stationary bike, for patients to stay active.

In addition, Shelly Schwedhelm—a nurse and executive director of emergency management and biopreparedness at Nebraska Medicine, the health network that owns NMC—said the rooms “have Wi-Fi, they have TV, they’ve got a small refrigerator. Just a lot of the amenities you’d have if you were going to a hotel with a lot of engineering controls.”

Officials also are providing books, games, and musical instruments to patients who request them, though Taylor Wilson, a spokesperson for Nebraska Medicine, said they had to turn down a patient’s request for the game Twister. “[I]t’s probably not the best quarantine activity,” Wilson said.

Phil Smith, an infectious disease expert who led the charge in creating NMC’s original biocontainment unit, said while there initially “were a number of skeptics” when NMC sought out to build the unit, the investment was worthwhile. NCM’s ability to treat patients with highly infectious diseases “vindicates all the work and the lobbying we had to do to keep the [biocontainment unit] viable,” Smith said (Mervosh, New York Times, 2/18; McFetridge, Associated Press, 2/18; Neuman, “The Two-Way,” NPR, 10/6/14).